Electronic monitoring of nonviolent criminal offenders who are placed under home confinement has become a popular alternative to incarceration. In 2005, business executive and TV personality, Martha Stewart, became the unwilling “poster woman” for this technology. Referring to the ankle bracelet she was required to wear, she stated during a Web chat (March 14, 2005) from her estate that “I hope none of you ever has to wear one.”

Monitoring provides a convenient sentencing alternative because it is a punishment less harsh than incarceration but more strict than minimally supervised probation. However, the original goal of electronic monitoring was not to punish offenders but to provide a means of rewarding prosocial, noncriminal behavior.

Early experimental work with monitoring devices was done by a group of graduate students and volunteers at Harvard in the 1960s.  My twin brother, Ralph Kirkland Gable, obtained a patent (#3,478,344) with William S. Hurd in 1964, and we published an article that year outlining how such devices could be used. [1]  Here are two photographs of the project developed by the Harvard group; it was called “Streetcorner Research.” [2] 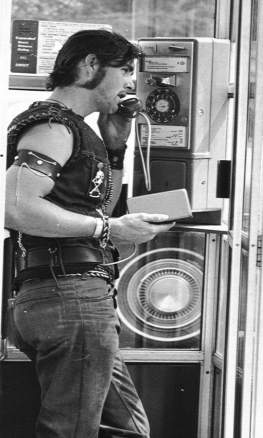 I moved to the Los Angeles area, and mimicked (with less success) what my brother had done in Cambridge, Massachusetts. I devised with Richard Bird a belt- mounted transceiver that was capable of sending and receiving tactile signals. 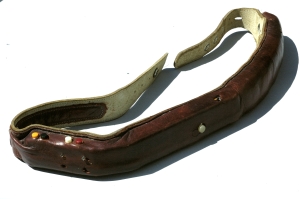 Two-way communication with juvenile offenders was possible within a circumscribed geographical area without the need for fixed transceivers because we set-up a small FCC-licensed experimental radio station.    The photo above shows a young adult with a two-way vibro-tactile belt in a classroom.  A copy of the license is below. 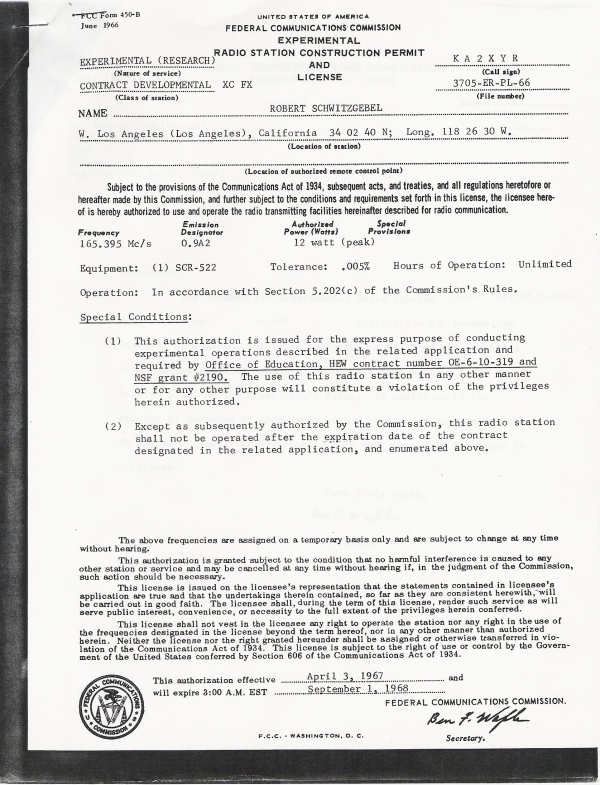 I subsequently wrote an article in the April 1969 issue of Psychology Today about the invention. The article was entitled “Belt from Big Brother.” (The magazine editors actually created the scary title without my knowledge.) Psychology Today 1969].   A more informative and scholarly article was published in 1970.3

In the 1980s, Kirk established a system in Thousand Oaks, California, under the auspices of a nonprofit research trust (Life Science Research Group, Inc.) that provided customary monitoring for offenders using a secure ankle band.  A unique feature of this system was a computer-based electronic bulletin board that would allow up to 20 participants and a network information manager to send and receive email from specified locations.   See simplified diagram below.

The design philosophy focused on the possibility of establishing a community-based network that would encourage members to share the responsibility of monitoring and giving encouragement to other members by facilitating planned and unplanned beneficial social interactions while preserving public safety.  One might think of it, in contemporary terms, as a “Bluetooth AA.”  The photo below of one of the Life Science Group participants was taken on December 31, 1989.

We are convinced that supervised monitoring with electronic devices should include a positive social groups. What is generally missing in probationary monitoring or in community re-entry programs are unexpected rewards, friendship, and a sense of social accomplishment.  Modern communication technology now provides more options for arranging the social components of such programs.   We wrote an article, entitled “Electronic Monitoring: Positive Intervention Strategies” in Federal Probation  in June 2005 which outlined some of our ideas.

We continued our efforts to convince corrections personnel in the winter (January) 2007 issue of the American Probation and Parole Association’s journal, Perspectives, and in the winter (February) 2007 issue of the National Association of Probation Executives’ journal, Executive Exchange  And here’s an article that has a bit more history and predicts the future of electronic monitoring  Journal of Offender Rehabilitation.  A one-page article by Gary Wolf appeared in the November, 2007, issue of  Wired magazine.  An article in Corrections Compendium (volume 32, number 5) has a list of a dozen probation or parole programs that use positive incentives.  A more recent and brief summary of this early history of monitoring appeared in a British psychology journal British Psychology Society and in Reason Magazine on May 24, 2012 The Lighter Side of Electronic Monitoring – Reason.com.   I should note that some service agencies specifically prohibit the use of tangible incentives.  See, for example, the Oregon Youth Authority’s Community Services Individualized Services User Handbook: “Tangible items should not be purchased to promote pro-social behaviors and are generally not authorized” (May 2015, p. 16).

Nonetheless, I continue, with notable futility, to push for the use of positive incentive with electronic monitoring.  See this University of Illinois journal article, “Left to their Own Devices,” in 2009: Journal of Law, Technology & Policy.  The most sustained, careful. and thoughtful work on the whole issue of electronic monitoring and its effectiveness (or lack thereof) has been done by Prof. Marc Renzema at Kutztown University in Pennsylvania.  See, for example, his  2010 paper Renzema evaluation.  For a really rich source of data on this topic, check-out his website at renzema@kutztown.edu.  For an accurate and clear description of the basic principles of behavior modification as used in mental health treatment and criminal justice, see a paper published by Patricia Bach and Stanley G. McCracken funded by the Office of Alcoholism and Substance Abuse of the Illinois Department of Human Services titled “Best Practice Guidelines for Behavioral Interventions.”

As for the anklets devices themselves, they are likely to become a “thing of the past” in not many years.  Smartphones are where the action is.  If you have nothing better to do, you might check out Robert S. Gable, “The Ankle Bracelet is History: An Informal Review of the Birth and Death of a Monitoring Technology, Journal of Offender Monitoring, 2015, Vol. 27, #1, pp. 4-8; or Robert S. Gable & Ralph Kirkland Gable, “Remaking the Electronic Tracking of Offenders into a ‘Persuasive Technology,'” Journal Technology Human Services 2016 (2), 2016, Vol. 34, #1, pp. 9-31.  This was the last article my twin brother helped author because he passed away in January 2015 after more than 18 years of dealing with leukemia.  His daughter, Sandra Ryan, and I are trying to carry on his spirit of goodwill, creativity, and occasional  goofy humor.  The reduction or elimination of bail tends to increase the use of electronic monitoring.  Bluetooth tethered or non-tethered smartphones with identity apps is the growing edge of client accountability and support.  Let’s Stop Using Ankle Bracelets to Monitor Offenders – IEEE Spectrum(2).  Here’s an alternative source of the same IEEE Spectrum magazine article: Last Legs Spectrum.